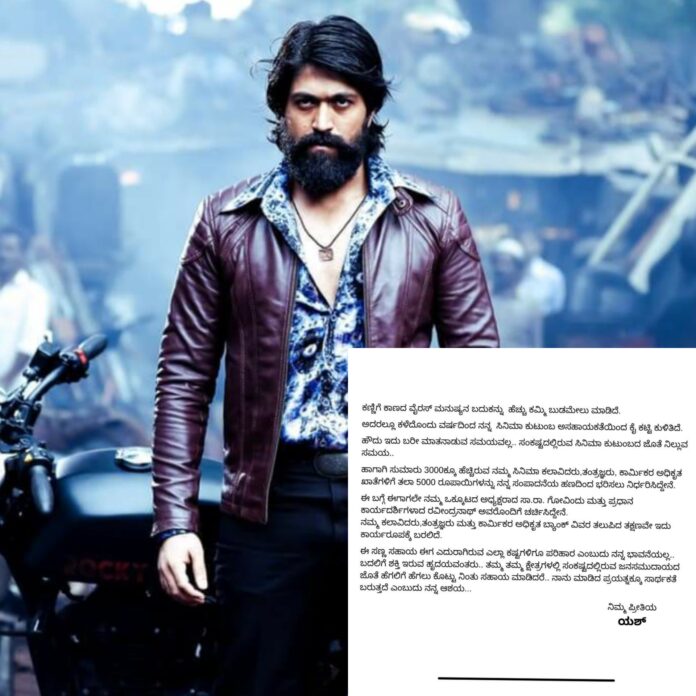 Actor Yash to donate Rs 5000 to Kannada film industry workers including technicians. According to the actor, he will be donating to 3000 workers which comes to Rs 1.5 crore.

Due to the lockdown being implemented in Karnataka for Covid’s control, the cinema industry has been completely shut for the past four months. This has left thousands of artists, technicians and workers in distress.

The KGF star Yash has come forward to help his film fraternity technicians and workers. More than three thousand cinema workers get Rs 5000 directly to their account through Yash.

In his social media account, the actor shared a post stating, “Covid 19 has proved to be an invisible enemy that has dismantled the livelihoods of innumerable people across our country. My own Kannada Film fraternity has been badly affected as well. In light of the grave times we live in, To each of the 3000 odd members which includes all the 21 departments of our film fraternity I will be donating from my earnings, a sum of Rs 5000 to their personal accounts.”

He added, While I am very well aware that this may not serve as a solution to the loss and the pains caused by the situation we are in, its a ray of hope, since it’s HOPE that is certainty of faith, Faith of better times. Love, YASH