One cannot watch Rajinikanth’s Petta movie in Kannada on its release day. The tamil movies dubbed version will be released after two weeks run of tamil version.

If Rajinikanth’s  ‘Petta’ tamil movie released in Kannada dubbed version, it would have been the first movie simultenously releasing on the same day in Karnataka.

However, according to a news report, It is said that the movie Petta will release in Kannada only two weeks after its tamil release.  The movie is distributed in Karnataka by the leading distributor and producer Jack Manjunath. 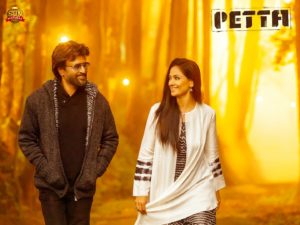 The highly-anticipated Karthik Subbaraj film, starring Rajinikanth, is expected to rekindle nostalgia in hardcore Thalaiva fans as they get to catch a glimpse of the Rajinikanth of the 90s.

Petta seems to be very different from the Rajinikanth’s outings of 2018, be it the political thriller Kaala, or the sci-fi 2.0. During the audio launch of the film, Rajnikanth said Petta would be a throwback to the kind of films he did in the 1990s.