It was nostalgic movement for Powerstar Puneeth Rajkumar in Chikmagalur, while shooting for his upcoming movie Natasarvabhouma. During movie shoot enroute Puneeth got to stop near Attibele, after recalling his childhood memories shooting for the movie ‘Bettada Hoovu’.

He shared his childhood memories of shooting for the movie. Puneeth said, “This is the place if i am not wrong, a set of a house was put for that movie and the shop were he had to buy the book. Recalling the mother character played by Padma Vasanthi, director Lakshminarayan, cameramen Gowrishanker and a song that was shot with veteran actor Balakrishna. 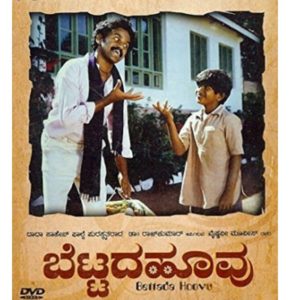 Also he shared that the movies production was handled by his uncle Vardhanna who stayed with them for a month.” It was a sweet memory for him to cherish, he spoke to few localities there and they explained about the places the movie was shot.

The movies story is about Ramu, a poor boy, has higher ambitions in life. He works hard and saves money to buy a book. But, situations drive him to take a hard decision when his family members suffer in cold weather.