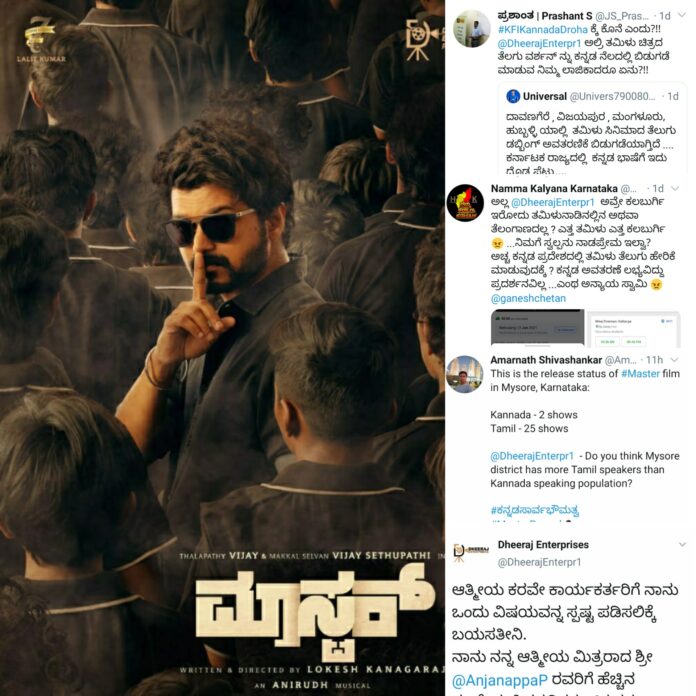 The Karnataka theatrical rights of Thalapathy Vijay– Vijay Sethupathi starrer Master movie in 3 languages, has been bagged by Dheeraj Enterprises for a whooping amount. However, the kannada cine lovers, have been disappointed over the kannada version of Master not getting too many screens in Karnataka.

Several kannada activists and kannada lovers have expressed displeasure over the kannada dubbed version releasing in a least number of theatres. Also there are complaints from people on movie being released in places, where only Kannada speaking crowd exists.

In other districts of Karnataka, the telugu and tamil versions of Master movie gets maximum screens.

After Netizens and public on social media demanded that the movie should be released in Kannada. The news about its release in all regional languages in Karnataka were announced. However, in reality the number of Kannada dubbed version of Master remains in not more than 20-30 screens in the state.

Recently, The Karnataka State distributor Dheeraj Enterprise in a tweet stated, “An appeal to Anjanappa, the leader of the Karnataka Rakshana Vedike. It was reported that 65 lakh activists were waiting to watch the film. Ticket booking in Kannada is moving very slowly now.
So we request at least half the people to come and help us book tickets for the Kannada version.”

This tweet later took a sarcastic turn from the fans and social media users. With the Twitterati’s posting comments over the distributor’s tweet stated, “The distributor has released Kannada dubbed version of Master in minimal theatres. And the telugu version gets more screens for the movie. Then why should they seek support from Kannada people to watch the movie in theatres.”

Irked over the distributors tweet, over requesting the Kannada activist to send kannada audienece to fill the theatre.

One of the Twitterati, Amarnath Shivashankar in a tweet stated, “Look at the Master film show timings in Mysore. There are 2 shows in Kannada, 1 being in the morning. There are 25 shows in Tamil and a lot of them happen to be in the evening and night when it is convenient for people to go why so Dheeraj Enterprises.”

He added, Here is the list of movies running in Shivamogga district, Karnataka. 1 kannada film and 5 non kannada movies are currently running. Why has Kannada Film Industry given up in core kannada speaking centers? why haven’t they released movies for Sankranti?. 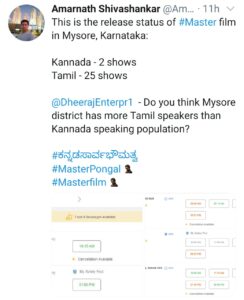 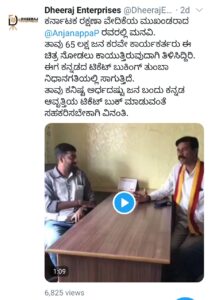 Another tweet by Namma Kalyana Karnataka stated, “Dheeraj Enterprises please note Kalaburgi is not in Tamil Nadu or Telangana? Where is Tamil and where is Kalaburgi. Do you have a little love towards your State? For imposing Tamil and Telugu in a Kannada place. Even after availing Kannada version, it is not released here.” 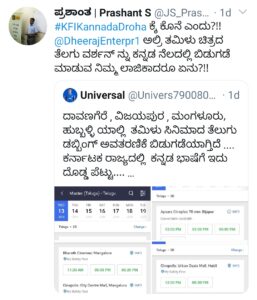 While others question over the logic of releasing a telugu dubbed version of a tamil movie in Kannada state. It is reported that the movie is released in Kannada along with Tamil and Telugu. But the theatres getting space for Kannada version is lesser than the other 2 languages.

The movie is directed by Lokesh Kanagaraj and is produced by Xavier Britto. The music for this movie has been scored by Anirudh Ravichander.

Earlier in March, Dheeraj Enterprises had shared this news, “Just met Master himself actor Vijay sir at Master audio launch event. It was pleasure meeting with him and he is so charming and enchanting. Super excited to release Master in Karnataka this summer in Tamil, Kannada and Telugu.”

On Wednesday, a tweet from Dheeraj Enterprise stated, “The Day we all waited for is finally here. We are immensely grateful and thankful to Thalapathy Actor Vijay and Lalit Kumar sir for providing us with the opportunity to distribute Master Film in Karnataka. Wishing all success to team Master.”

Adding to it, Master Celebrations galore all over. We were thrilled to participate in the Theater celebrations organized by Bangalore Tamil pasanga team yesterday at Aruna Theatre in Bengaluru. We are thankful to them for inviting our team to be part of their celebrations, another tweet stated.